Paris has many pigeons. Grey, speckled, white, a microcosm of pigeon culture, all with the same beady red eyes, watching, waiting. And, oh yes, they are all tremendously fat. I’m not talking about your average run of the mill fat pigeon. I’m talking about full on boisterous, carnivorous birds that spend their days bathing in the water being expunged by the storm drains every morning, waiting for the stereotypical Frenchman to get hit by an errant car as he jaywalks, exclaiming ‘Oh la la!’ as his baguette falls to the ground and becomes the pigeon’s next meal. You may think I am stereotyping the French people by saying this, but in reality I heard the term ”oh la la” said three times while in Paris, the drivers were terrible, the pedestrians took needless risks, and I saw a Frenchman in a black and white striped shirt carrying a baguette down the street on the very first day we were there.

The pigeons of Paris essentially live on bread crumbs and, I assume, the fear of the tourists. There is no doubt they are watching you, and they can sense your fear. For instance. This little bugger called Luxembourg Castle his home. He watched Alex and I as we ate our baguette (shut up, you don’t own me) and our pomme tartlette, which was essentially a slutty version of your standard apple tart. This pigeon clearly wanted to take part in the meal but my flapping arms and “Whoop-whoop-whoop” noises dissuaded him and so he went to the fountain across from us. It was there he decided to pick a fight with a flock of seagulls. As you call tell from this picture, the winner was very clear. 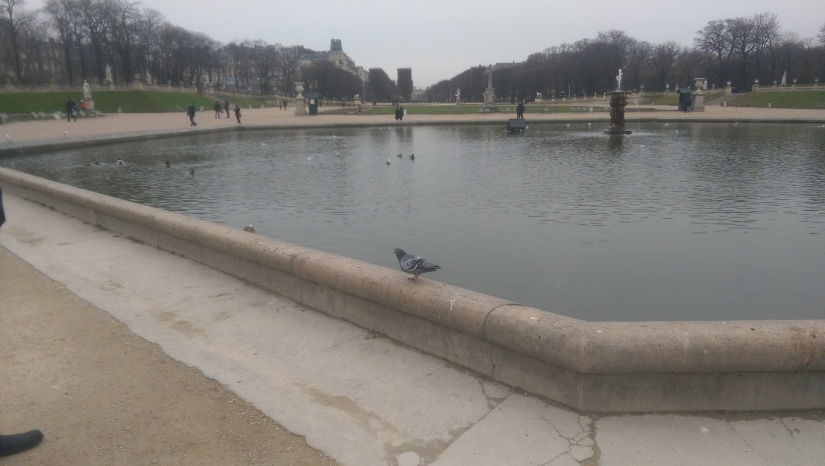 This particular pigeon spent most of his time hanging around the back end of Musee de l’Armee, patiently waiting for unsuspecting tourists who were keen on seeing Napoleon’s tomb. I theorize that every night this pigeon flutters through the doors just before closing and takes a giant dump on Napoleon’s tomb because, let’s face it, if you were a pigeon with the capacity to fly into a building with a towering ceiling where no one could capture you and poop on a national hero… wouldn’t you? 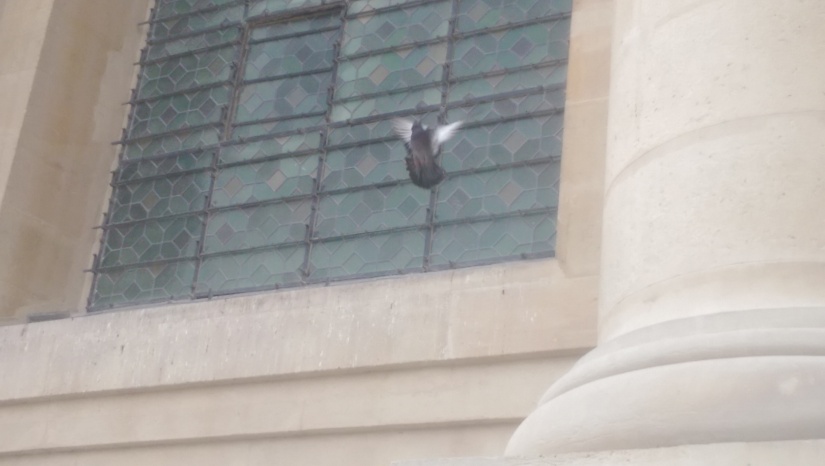 Next on the list of Pigeons of Paris we have this little fatty who, despite having his gargantuan girth working against him, managed to struggle underneath this fencing to escape my paparazzi wrath. Just beyond the Eiffel Tower is this lovely green space that is full of three things: Tourists, Roma trying to scam the tourists, and fatty fat fat pigeons. I kid you not, in the fifteen seconds it took me to snap this photo Alex was approach by a Roma who wanted him to sign a petition for the deaf, blind, and mildly incontinent, and when he refused they started to curse him out. I can only assume that means the Roma and pigeons are somehow in cahoots. Fill a city with pigeons, throw in some scamsters, toss in a clipboard with a fake petition or two and blam! Success.

To round out our exploration of the Pigeons of Paris we have what might just be the ultimate pigeon. I met him at the Small Town America portion of Disneyland Paris. He was hopping around, eyeing up people. When I tossed him a piece of croissant he landed on the ground and hobbled forward and… wait, hobbled? Holy shit, does he had a broken foot? Oh my god that poor pigeon has a broken foot! I instantly named him Pepito, fed him the rest of my pain de chocolat and paid for the post secondary education for all his children. It was only then that it occurred to me that I had been had. Pepito was the Roma equivalent of pigeons. There was no way his foot was broken. No way at all. It was all a ploy for my sympathy, the bastard! What a jerk! And those other people are feeding him a muffin now? What the actual hell? Being the sort of spirited vigilante that I am, I gave Pepito a taste of his own medicine and chased him down throughout Small Town America, much to the horror of the tottering children and their angry parents. Long story short I’m not allowed back in Disneyland Paris. *

*Some facts may be exaggerated for my own amusement

2 thoughts on “Pigeons of Paris”