One of my favorite memories from my childhood is baking with my dad. Sunday’s were Loaf Days. We’d pull out mom’s Best of Bridge and find a loaf and bake the hell out of it, because why not?

The tradition didn’t continue into my teenage years, but I like to think it helped enamor me to baking. Now, in my unemployed state, with bits of this and that in my cupboard at home, I went on a baking spree that resulted in a ridiculous amount of loaves. Thank goodness for bulk flour and sugar!

Well, I’m still bored, still unemployed, and recently bought myself of my favorite sour cherries to comfort myself. I realized today that the sour cream I usually use for baking was about to go off, so I needed to use it ASAP. Also, Costco was having a sale on limes ($2.99 for a giant bag of ’em. How can a girl refuse?) Lime and cherry is one of my favorite combos, so why wouldn’t I make it into a delicious loaf? More importantly, why wouldn’t I share my recipe with the world while also being just… uncontrollably vile in my commentary?

Get ready for the Bored Baker’s Sour Cherry and Lime Face Punch Loaf!

1. First thing is first. You’re going to want to preheat your over to 375 degrees. The original recipe called for 400, but a quick scan of the comments on the website I snatched it from said that 400 degrees usually resulted in burning.

2. Okay, good job, Einstein. Now, clean your counters because, let’s face it, you live with two cats and they are probably nasty as hell.

3. Brilliant! Now, time to assemble your ingredients. I want you to get the following:

Some sweet-ass sour cherries and their juice

Half a mo’fo lime.

4. Remove the random garlic clove from the mixer and reevaluate your life choices.

5. Damn skippy. Now cream the hell out of the butter and sugar.

6. Oh yeah, if that butter is softened first, it’ll help a lot.

7. Okay, don’t worry about it. Now add those eggs and get your heaping sour cream.

8. What’s that? The sour cream is awfully liquid? I don’t care. Use it.

9. Mix the shit out of it. Mix it like you’re Sir Mix-a-Lot and you’ve just been given an order to mix a song that will bring about world peace.

10. Now you’ve got that sorted, clean up your shit. What are we – animals?

11. Good. Now you add your flour and start what I presume is a kickass KitchenAid Mixer. If you are a pleb and have to do it by hand, proceed until it is thoroughly mixed.

12. Meanwhile, you’re going to take your lime and zest it. If you don’t have a zester, I don’t know why you even bother getting up in the morning. Add that zest to your mixer.

13. But wait! What are you going to do with all that delicious lime juice? Let me tell you, you aren’t done ruining that lime’s day yet. Get out a mo’fo saucepan and squeeze the hell out of it.

14. Once you have that lime juice in the pan, you’re going to pop the lid on your sour cherries and add about three tablespoons of sweet, sweet cherry nectar, and three teaspoons of sugar.

15. While that shit is cooking up nice and tasty, you’re going to take three heaping tablespoons of those delicious cherries, drain the juice (just add it to the saucepan) and then squash the hell out of them.

16. Add those squashed delicacies to your whole mix.

17. If the end result of mixing looks like a crime scene, you’ve probably added too many cherries. That’s cool though. Now add your baking soda and powder. The original recipe calls for a pinch of each, but I add 1/4 of a teaspoon because I am not bound by the conventional chains of society. 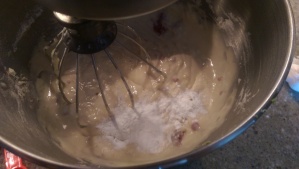 Why both? Because I don’t know the difference between the two, and quite frankly I am out of craps to give

18. You’ve mixed it up? Good. Get yourself a pan. I don’t care what size. 9×5? Whatever. Who even cares anymore? Grease that puppy, even if you are using a silicone pan. You aren’t Wonder Woman, after all.

19. Back to the syrup on the stove. If you need to, add a bit more sugar and let it dissolve. You want some tiny bubbles to be coming from the middle.

20. Fill up that pan with your batter.

21. Now take that syrup, because you’ve probably run out of patience, and dribble half of it over the whole batter mix. Why only half? Because much like you’re life, there is a significant amount of waste here.

22. Take a knife and swirl the shit out of the batter. It’s like those gross overly-sweet cinnamon swirl loaves from Starbucks.

23. There. It’s done. What do you think? Wait, no. Not yet. Pop it in the over for about 45 minutes or until a knife thrust wildly into the center of it comes out clean.

In all honesty, make sure there aren’t pockets of juice in the corners, because they will get quite brown very quickly. This particular version of the recipe only ended up needing 30 minutes for whatever reason.

And there you have it. Did it work? I don’t know, maybe. The nice thing about this recipe is that if you aren’t a fan of cherries and lime you can replace it with anything. Apples and cinnamon? You bet. Pumpkin and ginger? Why the hell not? Blood and the tears of your lost youth. Always. It’s a very adaptable recipe, unlike you, you are forever trapped in the soul-crushing monotony of your existence.