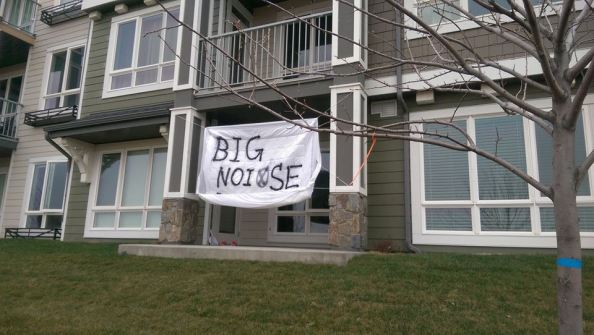 You’re upset. I get that. It’s tough living in a multi-family building, especially when you move in expecting ethereal peace and, I assume, the dulcet tones of Enya to wake you up in the morning. Obviously you missed the previous amendment to the condo regulations where it was stated that Enya would no longer be available to sit in the lobby 24/7 and sing Orinoco Flow. I know, I was disappointed too.

That being said, I’m not entirely convinced that hanging a sheet from your ground floor balcony that reads LOUD NOISES IN THE WALLS is the way to go about relaying your grievances with what I assume to be both your neighbors and the parking garage underneath of you. I don’t actually assume. I know this because when we called our residential manager to ask about what weed you were smoking, our lovely residential manager informed us that this was precisely what was bothering you.

I get it, I do. They didn’t insulate the walls up to your asylum-like standards and the heavy breathing of your neighbors is obviously disconcerting. When you levied this complaint, you were informed that the condo was insulated to the standards established by all homes, making us all sailors on the same nasty voyage. But again, heavy breathers, I get it.

I just, I feel like maybe this wasn’t the best way to escalate your complaint to a higher level. For one thing, it may suggest to those living in the townhomes around us that we are infested with ghosts, probably due to the fact that our condo was built on an old aboriginal burial ground. Now, I’m not saying that’s true, but if it were our condo might just be at risk of being burned down by irate Silverado residents with pitchforks and a well-meaning shaman who hasn’t quite mastered his art yet.

That would be bad.

Generally when it comes to conflict resolution it is good to try a polite approach first. I had a teacher once tell me that it was best not to open with both barrels. Granted, I was writing an angry letter to Coca-Cola about them destroying the rainforest and perpetuating a culture of violence in Central America. He may have been right that it was in my best interest not to start off my letter by calling them the soulless embodiments of Satan and all his dancing minions. But I digress.

I’m just curious, did you actually try talking to your neighbors? I know, crazy idea, right? Like, who would think to try to resolve at least part of the conflict through polite conversation as opposed to, say, passive-aggressive douchebaggery. But these are strange times we live in, and sometimes douchebaggery is what is required to get it done.

Now, I know what you’re thinking. Kathleen, aren’t you being just as passive-aggressive as I, your neighbor, and my giant, obnoxious, wasted sheet? You would be right, however I thought it would be in poor form to reveal the intimate details of your condo unit. How can I ever feel content with myself knowing that I wrote down how I think your unit number is probably somewhere around [REDACTED] or that at least one of you occupying said unit wears black skater shoes that you don’t put inside because I assume you don’t want to track mud in? That would be sinking to your level, and I don’t want to be that sort of person.

But you know, dear overly passive aggressive neighbor – life is hard for all of us. Sometimes we don’t like our neighbors. Sometimes their kids are loud in the morning, or their dinners stink up the hallway, or their yappy dogs don’t shut up, or they hang giant banners over their balconies as a way to relay their grievances with the world. Sometimes our neighbors do stupid shit, and instead of publicly shaming them, it is good to show an ounce of restraint and take the higher road. I, of course, have opted to not do that, because your inability to resolve these world-shaking issues in a manner befitting an adult is both laughable and simultaneously enraging. Sort of like watching the seasons of Community where Dan Harmon wasn’t involved; sure, they had their moments, but I was mostly pissed off that they had the gall to fire the man in the first place. Maybe you could come hand out some time, watch some of the new season with us.

Where was I? Oh right. The sheet. To be perfectly honest, I’m really curious as to why you think hanging a giant sheet on your balcony, which, to reiterate, looks like this…

Would somehow change the outcome of your current issues in your favor. You know if you want your condo acoustically reinforced it will be up to the condo board, right? The condo board, which will be made up of your neighbors? The people who don’t want to see a sheet hanging on a balcony proclaiming the very possible reality that ghosts are totally a thing and that we all need to reevaluate our concepts of the afterlife? Those people? Yeah. And we, as a condo board, because you bet your ass my husband and I are going to be on it, are not going to simply roll over and accept that your particular needs are somehow more important than our small microcosm of a community as a whole. That’s right, baby, we’re all in this together, and you have to play nice if you want things done.

I’m psychic. Did you know that? I know what you’re thinking now too. But Kathleen, you aren’t playing nice either. Nope, I’m not. But my needs and wants are fairly simple. I don’t mind noise. It reminds me of being closer to the city; it reminds me of being alive. Sheets with spray painted complaints remind me of what I imagine Detroit must be like. All you’re missing is a few ratty stuffed animals that are missing limbs, drifting precariously in the wind. You’re two candles away from a high school ritual sacrifice! Your sanity is literally three sheets to the wind. When that last sheet blows away we are going to have a serious problem with you painting the walls of your condo with menstrual blood and screaming at the corkboard in the mail room.

I don’t know, neighbor. It just seems like the sheet isn’t going to get you anywhere. Maybe try addressing your complaints in a more adult sort of way, with patience, kindness, and a little respect for both the people you are dealing with, and those around you. Or, hell, I don’t know, write an open letter or something.